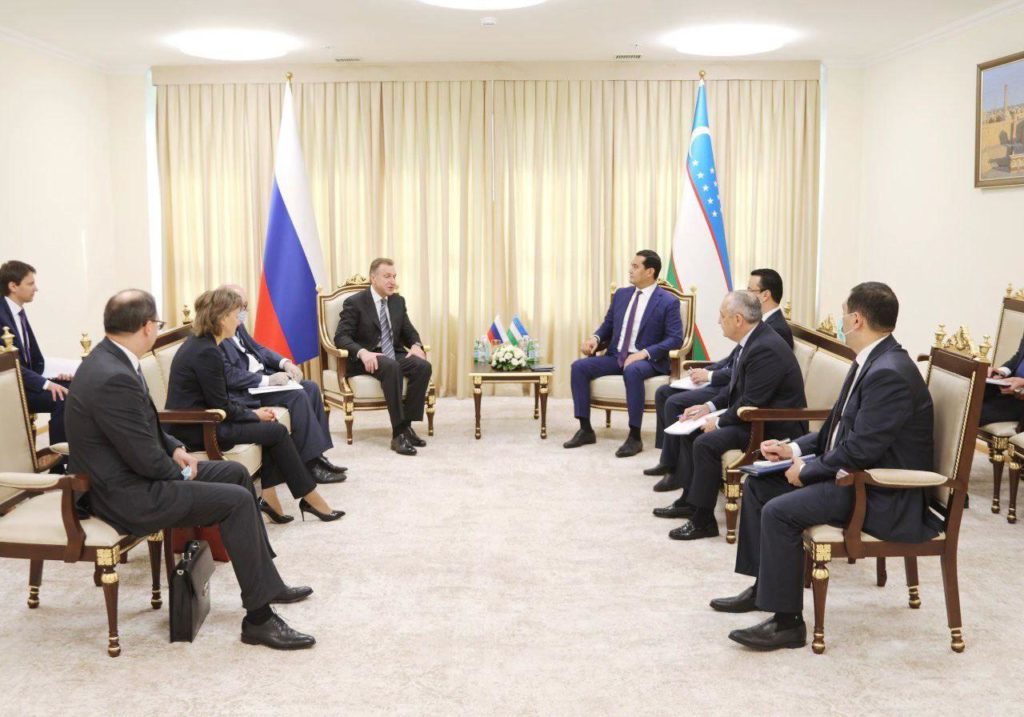 On September 17 of this year in Tashkent in the building of the International Business Center, a meeting was held between the Deputy Prime Minister – Minister of Investments and Foreign Trade of the Republic of Uzbekistan S. Umurzakov with the Chairman of the State Development Corporation “VEB.RF” I. Shuvalov, who is in Uzbekistan as the head of the Russian business missions consisting of entrepreneurs and government officials.

The parties noted the high level of strategic partnership between the Republic of Uzbekistan and the Russian Federation and expressed their commitment to the further development of economic and investment cooperation by intensifying bilateral contacts at various levels.

For reference: with the support of VEB.RF, 24 projects totaling 3.5 billion euros in the energy, metallurgical, mechanical engineering, agriculture and transport sectors are currently being implemented and developed in Uzbekistan.

The management of VEB.RF emphasized the multifaceted nature of economic cooperation and broad opportunities for strengthening the business partnership of the two countries, introducing advanced industrial technologies and establishing sustainable cooperation ties.

During the meeting, mutual readiness to develop a dialogue aimed at expanding investment cooperation and identifying new points of interaction between the economies of the two countries in a pandemic was indicated, as well as issues on the development and approval of new investment projects in the fuel and energy, mining, pharmaceutical, machine-building industries , in the development of urban infrastructure, tourism, information and communication technologies and transport.

After the meeting, an Uzbek-Russian round table “Key areas and joint projects of Uzbek-Russian cooperation” took place. The participants discussed the joint investment projects under development, the prospects for expanding industrial cooperation and intensifying business partnerships between entrepreneurs of the two countries. The round table from the Russian side was attended by the leadership of the Ministry of Industry and Trade of the Russian Federation, the State Development Corporation VEB.RF, JSC Russian Export Center, leading Russian companies and banks, such as VimpelCom, BMB NRC AGROLOGISTICS, Power Machines, Rostec, Kamaz, Transmashholding, MetProm, Uralmashzavod, Gazprombank, and from the Uzbek side – the leaders of ministries, departments, industry associations, commercial banks and business representatives.

During the round table, the high dynamics of development and the scale of cooperation between Russian and Uzbek companies in the fields of investment, technology and industrial cooperation were emphasized – in particular, with Power Machines JSC, projects are currently being implemented to modernize the power units of the Syrdarya and Farkhad hydroelectric power plants, and together with the state corporation “Rostec” in Uzbekistan mastered the assembly of demanded cargo vehicles “Kamaz”.

During the round table, representatives of the Russian business community presented information on the technological and investment potential of the companies they represent and shared their vision of the prospects for the development of activities in Uzbekistan.

An exchange of views took place on the mechanisms for further interaction to develop specific project proposals in the energy, agrological, metallurgical, transport and educational spheres. In the highest priority sectors and directions, the counterparties agreed on further practical actions aimed at reaching specific agreements.

At the end of the round table, the ceremony of signing the Agreement on the terms of the exchange of electronic messages in the system of transferring financial messages of the Bank of Russia between the State Development Corporation “VEB.RF” and JSC “National Bank for Foreign Economic Affairs of the Republic of Uzbekistan”, as well as a loan agreement on financing the purchase of automobile and special equipment of the “KAMAZ” brand between the State Development Corporation “VEB.RF” and JV LLC “KAMAZ ASIA LEASING”.

The state development corporation “VEB.RF” was founded in 1922. It is the largest development institution in Russia with $ 51 billion in assets that contributes to the implementation of socio-economic policy, modernization and increased competitiveness of the economy.