There are 162 districts and 118 cities in the Republic. More than 42% of the population live in the cities. The biggest city is Tashkent, the capital of Uzbekisan with the 2.3 million population. More than a half of Russians, citizens of Uzbekistan, live in Tashkent which is equal to approximately 30% of the whole population of the city. The second big city in Uzbekistan is Namangan (398 thousand people). The next one is Samarkand (366 thousand) which was the capital of the Uzbek SSR until 1930. The number of big cities of Uzbekistan are located in Fergana valley: Andijan (356 thousand); Fergana (320 thousand); Kokand (thousand). It is also necessary to point the ancient Bukhara (271 thousand) which was the biggest cultural and political center of the Uzbek people for centuries. Lastly, Nukus with 260 thousand population as being the capital of the Karakalpak autonomy republic.

Andijan is located in eastern part of the Fergana valley, on the ancient sediments of the Andijan-sai River, 260 km south-east of Tashkent (385 km along the road), 40 km north-west of the Kyrgyz Osh. The area is 4200 square kilometers. Andijan is the ancient city, the pearl of the valley. From 9thcentury, it is first mentioned as one of the most ancient cities at the crossroads of the Great Silk Road, located in the south-eastern part of the Fergana Valley, surrounded by high mountains, on the Andijan-sai river. The exact date of its foundation is not established. It is the land of ancient history, original traditions, unique school of agriculture

Bukhara is the center of the Bukhara region and one of the most ancient cities of Uzbekistan. The age of Bukhara is above 2500 years. In the ancient times it was part of one of the regions of Central Asia-Sogd. Caravans of camels from China and Europe transported goods along the Great Silk Road through Bukhara for many centuries. Additionally, this city was a center not only for commerce, but also for Islam. He rightfully deserved the title of Bukhoro-i-Sharif — “Great Bukhara” among Muslims. Bukhara is one of the seven holy cities of Islam, with impressive architecture and rich history. Buildings that have absorbed thousands of years of history were preserved in Bukhara; it is the oldest center, which remained practically unchanged for the last two centuries. 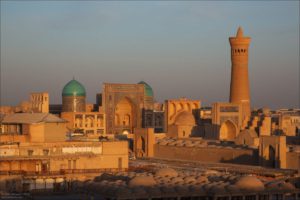 The name Gulistan formed from Persian – “flower garden” or “rose garden” . Gulistan – it is the city, center of the Sirdarya region of Uzbekistan, located in south-east part of Hungry steppe, on the left bank of the Syrdarya, 118 km from Tashkent at the exit from the Fergana Valley.  Previous names — Hungry steppe (until 1922), Mirzachul (until 1961).

After reestablishment of Jizzakh region in 1990, the center of the Sirdarya region was transferred from Jizzakh to Gulistan. 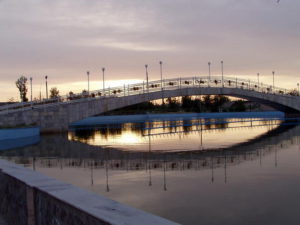 The name of the city Jizzakh formed from Sogdian “small fort”

Jizzakh – administrative center of the Jizzakh region in Uzbekistan. Jizzakh is located on the Sanzar River, at the northern foot of the Nurota Mountains, 180 km south-west of Tashkent and 90 km north-east of Samarkand.

The city is known from the X century. It is formed as an intermediate point in an oasis on the Silk Road, on the way from the Fergana Valley to Samarkand. Jizzakh region was part of Kazakhstan Since the foundation of the Kazakh SSR, until 1956. In 1956, Jizzakh region was transferred to Uzbekistan and Jizzakh became an Uzbek city. 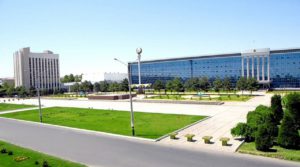 Karshi – the administrative center of Kashkadarya region. The city is located in the Karshi oasis, on the Kashkadarya river. Karshi is located about 520 km south-south-west of Tashkent, and also about 335 km north of the border of Uzbekistan with Afghanistan.

The history of the city dates back to VII century BC, it has always been a stumbling block for the conquerors, due to the fierce resistance of the population to any enemy. Karshi is located on the ancient caravan route from Samarkand and Bukhara to Afghanistan and India. An irrigation canal from the Amu Darya was conducted here in the early 1970s. The city is important for the extraction of natural gas.

Navoi – the city, located in south-west part of Uzbekistan in Zarafshan valley, in 360 km south-west from Tashkent. Navoi is the administrative center of the Navoi region. The city was named in honor of the great Uzbek poet Alisher Navoi.

The city, together with the region of the same name, was part of Kazakhstan since the founding of the Kazakh SSR and was part of the Hungry steppe region. The Hungry steppe (now Navoi and Dzhizak regions of Uzbekistan) region was transferred to Uzbekistan in 1956. Navoi was built in 1958 according to the project of Leningrad architects and became one of the leading industrial centers of the republic, known for its Navoi mining and smelting combine.

The word «Namangan» comes from the Persian «Namak Kann» — «salt mine».  Namangan is a city in eastern Uzbekistan, located in the northern part of the Fergana Valley, 430 km south-east of Tashkent. It is the administrative center of the Namangan region, which became after Uzbekistan got its independence. The first mention of Namangan is found at the end of the XV century. The territory of the city of Namangan and the former Davlatabad district now constitute a single administrative and territorial entity.

Currently, Namangan is one of the largest industrial regions of the republic. The leading sectors of Namangan are cotton ginning, machine building, electrical, chemical and food.

Nukus is the capital of the Republic of Karakalpakstan, the largest city of this republic. It is located in the central part of Karakalpakstan on the right bank of the Amudarya River, 800 km north-west of Tashkent. The southern and eastern part of the city is surrounded by the “Kizil Kum” (red sand) desert. The northern part of the city is bordered by the Amudarya delta.

The ecological situation not only in Nukus, but also all of Karakalpakstan, has developed very difficult because of the drying up of the Aral Sea and the use of pesticides in the vicinity of Nukus led to severe environmental pollution.

Samarkand is known in ancient literature as Sogdiana (Sogd.), Marakand (Greek). The second largest city of Uzbekistan, the center of the Samarkand region.

Samarkand is considered one of the oldest cities in the world, it is 2750 years old. For more than two thousand years, it has been a key point on the Great Silk Road. The city was conquered by the soldiers of Alexander the Great, the troops of the Arab Caliphate, the Mongol hordes of Genghis Khan. After numerous destructions and fires, it was revived again, grew, became the capital of large Central Asian states. For a long time, Samarkand was the capital of Tamerlan’s vast empire. Samarkand has preserved a huge number of samples of ancient architecture.  In 2001, the city of Samarkand was included in the UNESCO World Heritage List. 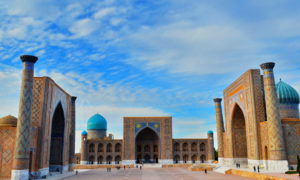 The former names of Tashkent are Yuni, Chach, Shash (Madina? -Ash-Shash), Binket (Binkt). Tashkent is the capital of the Republic of Uzbekistan, the administrative center of the Tashkent region. The largest population city of Uzbekistan and Central Asia. Today, Tashkent is a major political, economic, cultural and scientific center of the country.

The capital of the Republic of Uzbekistan is located in the north-eastern part of the republic, in the plain of the Chirchik River and occupies an area of ​​30 thousand hectares. Nowadays, almost half of the city is landscaped. Tashkent is divided administratively into 11 districts. The first mention of Tashkent was in the II BC. The city celebrated its 2,200 anniversary in 2009. Previously, it was not a very large city and was significantly inferior in its history to its more southern neighbors — Samarkand and Bukhara. A major transformation took place in Tashkent during the years of independence of Uzbekistan.

The name of the city comes from the ancient Iranian «tara-maiθa», which means «place of transition» (tara- crossing, crossing; maiθa- place). In ancient times, there was an important ferry on the Amu Darya River.

Termez is the southernmost city of Uzbekistan, the administrative center of the Surkhandarya region.

The city borders with Turkmenistan in the west, Tajikistan in the east and Afghanistan in the south. It is located on the right bank of the Amu Darya, along which the border with Afghanistan, passing at the confluence of Surhandarya, 490 km south-west of Tashkent.

The 2500th anniversary of the city of Termez was celebrated in 2002. 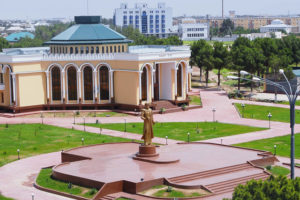 The former names are New Margelan, Skobelev. The name of the city of Fergana comes from two Persian words (Paris — angel) and (Khona — House) «House of angels» or «city of angels». Fergana is a city in eastern Uzbekistan on the southern edge of the Fergana Valley, the administrative center of the Fergana region, 420 km east from Tashkent. The city was founded in 1876 by M. D. Skobelev, the first military governor called New Margelan. Fergana is one of the oldest cultural oases in Central Asia.

Fergana is one of the most important centers for the production of oil, because the first oil refinery was built there in 1908.

Khiva is a city in the Khorezm region of Uzbekistan.  Khiva was known as Khorasmia in ancient times, later it was called Khvarezm — Khorezm. The centuries-old history of Khiva is inextricably linked with the fate of Khorezm. One of the oldest cities in Central Asia, located in the southern part of the Khorezm oasis. From the south, the sand dunes of the Karakum desert rise to this ancient Uzbek land, and the sandy kingdom Kyzylkum surrounds the northeast. Khiva is mentioned a small town for the first time in the 10th century as. For a long time it was one of the main centers on the Great Silk Road.

Khiva can be deservedly called the city-museum under the open sky.