> News of Uzbekistan > Uzbekistan and Japan to sign agreements for US$6.5 billion

Uzbekistan and Japan to sign agreements for US$6.5 billion 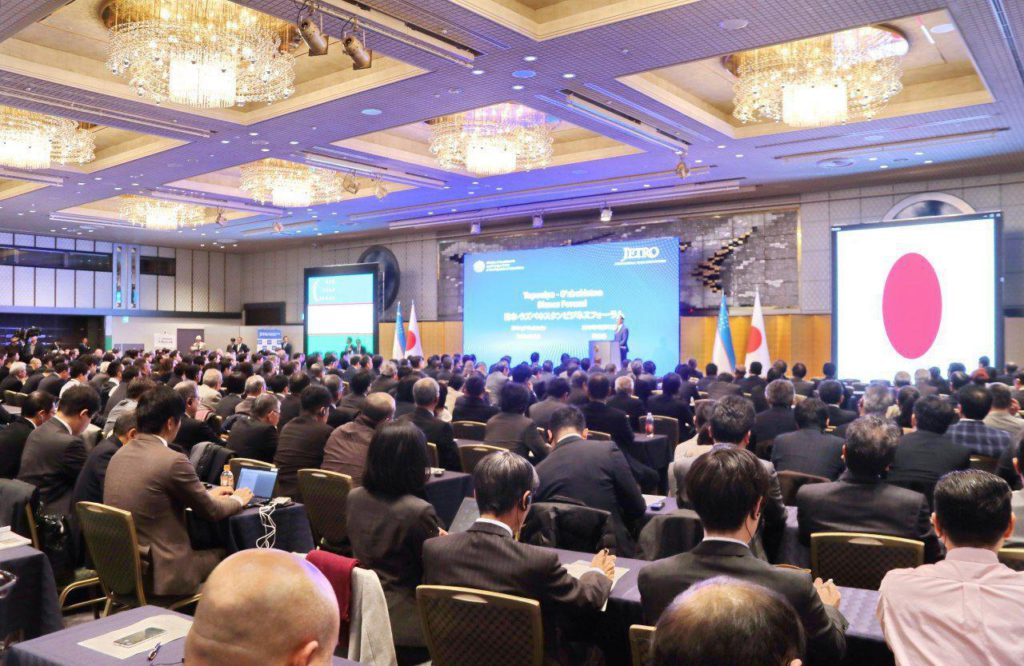 On 16 December, an Uzbek-Japanese business forum was held in Tokyo with the participation of heads of ministries, departments, industry associations and commercial banks from the Uzbek side, and representatives of Japanese business circles – heads of large holdings, financial organizations and multidisciplinary industrial corporations.

The forum was attended by Deputy Prime Minister, Minister of Finance of Japan Taro Aso, heads of the Japan Organization for Foreign Trade Development (JETRO), Ministry of Economy, Trade and Industry of Japan, Japan Business Federation (KEYDANREN). In total, the event was attended by representatives of more than 500 Japanese companies and organizations.

Opening the event, the head of the Uzbek delegation, Minister of Investments and Foreign Trade Sardor Umurzakov, emphasized that relations between Uzbekistan and Japan are acquiring a systematic, multifaceted nature, and noted that Japan is among the strategic partners of the Republic in investment, trade and economic spheres.

He also stressed that the basis for mutually beneficial and long-term cooperation will be the favorable conditions created in Uzbekistan for foreign capital, along with a consistent approach to the implementation of bilateral agreements aimed at the full and timely implementation of the agreements reached.

The program of the forum included a plenary session and several sectional sessions devoted to highlighting the potential for developing cooperation in promising sectors of the economy – the oil and gas and petrochemical industries, the automotive industry, mechanical engineering and electrical engineering, food, textile and silk industries, the production of leather clothes and leather goods, infrastructure construction and tourism.

The forum participants had the opportunity to familiarize themselves in detail with the conditions created in a particular sector for conducting investment and foreign trade activities in Uzbekistan, discuss common interests and prospects for cooperation, and consider specific project proposals for further joint development.

Following the forum, a number of bilateral documents were signed on the implementation of joint projects and initiatives. So, at the interdepartmental level, a Memorandum on economic and industrial cooperation was signed between the Ministry of Investment and Foreign Trade of Uzbekistan and the Bureau of Trade Policy of the Ministry of Economy, Trade and Industry of Japan.

In Navoi region, based on Japanese technology, geological surveys will be carried out with the participation of the Japan National Oil, Gas and Metals Corporation (JOGMEC), and the Japanese organization for external technical assistance in the field of medical equipment (OMETA) intends to create a Japanese-Uzbek medical information center in Tashkent.

Large investments will be attracted to the automotive industry through the collaboration of Japanese Isuzu Motors and Itochu Corporation with Uzavtosanoat.

In addition, commercial banks of Uzbekistan signed a number of documents with MUFG Bank and Sumitomo Mitsui Banking on attracting additional investments to finance small and medium-sized business projects.

Following the results of the plenary and sectional meetings of the forum, investment agreements and trade contracts were signed in the fields of energy, mining and chemical industries, automotive, engineering, light industry, horticulture, pharmaceuticals, healthcare and infrastructure construction.

In total, during the visit of the President of the Republic of Uzbekistan to Japan, 48 agreements and contracts totaling US$6.5 billion will be signed.

The business forum has become an effective platform for highlighting the potential of bilateral cooperation between business circles of Uzbekistan and Japan in a wide range of areas, allowing to consolidate the agreements already reached and create a reserve for building up the partnership through the implementation of new investment initiatives and trade agreements.