> News of Uzbekistan > Uzbekistan GTL plant launched, a capsule laid in the foundation of another new enterprise

Uzbekistan GTL plant launched, a capsule laid in the foundation of another new enterprise 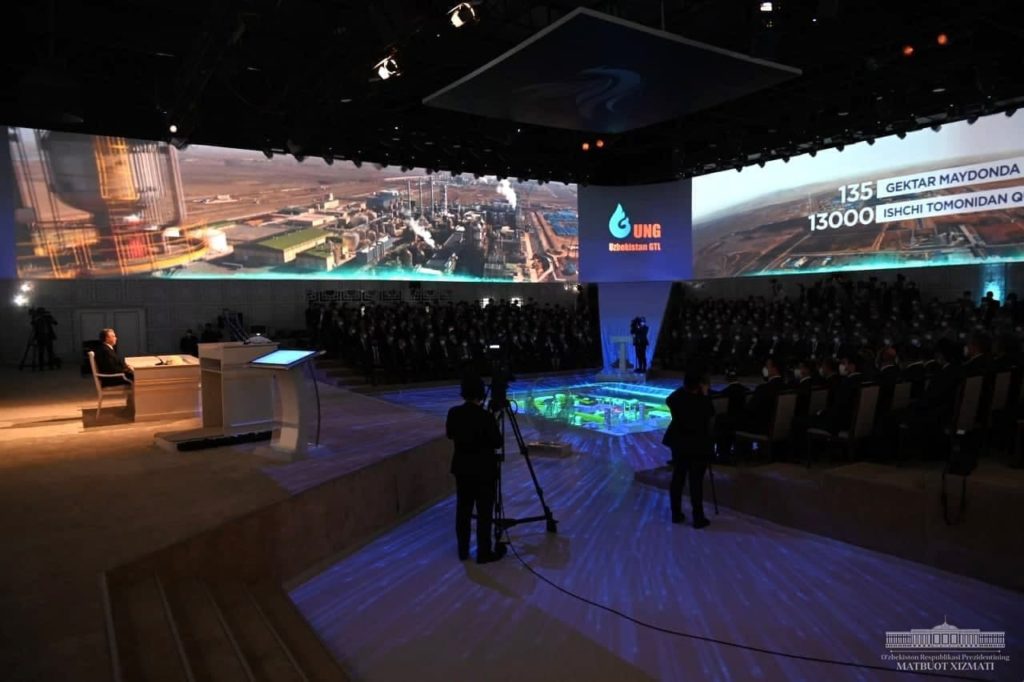 On December 25, the opening ceremony of the Uzbekistan GTL plant was held in the Guzar district of the Kashkadarya region. President Shavkat Mirziyoyev made a speech at the event.

– Today, on the eve of the New Year, we are witnessing a great event that opens another bright page in the annals of the industrial development of our country. The construction of such a huge complex, of course, was a direct result of the policy pursued in recent years to develop the domestic industry at a qualitatively new level, the head of state said.

As for the economic effect, the plant will convert natural gas into finished products in high demand on the world market, the cost of which is 3 times higher. In particular, aviation kerosene, which will be produced here, is much cleaner and of a higher quality in comparison with the products of other factories and is intended for the most modern aircraft. Diesel fuel also meets high standards – not less than Euro-6.

According to the estimates of the International Energy Agency, the production of GTL products in the world will double by 2030. Therefore, it is planned to increase the output of other new types of products with higher added value. In particular, the plant will implement 6 projects worth $ 620 million for the production of products such as alkyl benzene, butene and hexene, synthetic oils, maleic anhydride, emulsion additives, catalysts. Such semi-finished products are widely used in the chemical industry, the production of household chemicals, furniture, building materials and electrical engineering, the textile and leather industries.

The President stressed that today the world is actively moving towards a “green” economy and the new plant fully meets this trend. The plant’s products fully meet the highest international environmental requirements, norms and standards. When using GTL fuel, emissions of harmful substances will be 40 percent less than when using traditional fuel. This will prevent the release of 13.5 thousand tons of harmful substances into the atmosphere annually.

– With the launch of the plant, 1,300 specialists will be provided with permanent high-paying jobs. It is especially pleasing that about 80 percent of the specialists who participated in the construction of the plant are our local cadres, including young people who are striving to work in a new way, full of strength and energy.

These youth are the youth of New Uzbekistan. I am convinced that it will make a worthy contribution to the development of the national industry, will become its “golden fund”, – said Shavkat Mirziyoyev.

The tasks of revising curricula based on modern requirements, organizing students’ practice at the plant have been identified.

At the ceremony, the technical director of Uzbekistan GTL Marcel Jurgen Krause, President of Hyundai Engineering Kim Chang Hag, Deputy Chairman of the Board of Gazprombank Alexei Matveev, President of Air Products and Chemicals Seyfi Gasimi made speeches and noted the historical significance of the new plant.

Labor veterans, the parents of the plant workers stressed that this project is the embodiment of the principle “in the name of human honor and dignity” implemented in our country, and expressed gratitude to the head of state.

As part of the ceremony, a project was launched to triple the production capacity of the Shurtan Gas Chemical Complex.

A new enterprise worth $ 1 billion 800 million will be built next to the Uzbekistan GTL plant. By processing 430 thousand tons of naphtha per year, 380 thousand tons of polyethylene and polypropylene will be produced. About a thousand more jobs will be created.

Thus, the country’s first gas chemical cluster will appear in Shurtan. Production volumes in this cluster will be increased from the current $ 290 million to $ 1.8 billion in 2025, or will increase 6 times.

The enterprises of the cluster from raw materials worth $ 1 will produce finished products with high added value – $ 10.

– Projects for the construction of the Uzbekistan GTL plant and the expansion of the Shurtan gas chemical complex are an important stage in the formation of a new industrial era in New Uzbekistan. I am convinced that together with you we are successfully implementing many more large projects that will make a great contribution to the development of the national economy, strengthening its competitiveness, ”the President said.