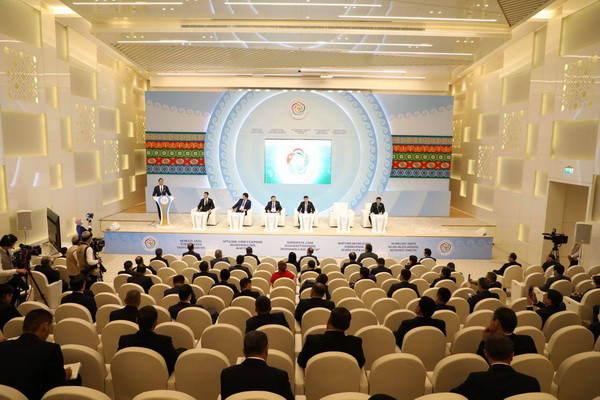 On 6 August, the Economic Forum of Central Asian countries was held in the Avaza National Tourist Zone (Turkmenistan) on the sidelines of the 3rd Consultative Meeting of the Heads of Central Asian States.

The event brought together over 150 delegates at its site – representatives of government circles, heads of key ministries and departments of Turkmenistan, Uzbekistan, Kazakhstan, Kyrgyzstan and Tajikistan.

During the opening ceremony of the event, the welcoming address of the President of Turkmenistan Gurbanguly Berdimuhamedov was read out to the participants. The work of the Forum was organized in the format of thematic sessions in specific areas: interaction in trade, economic and investment spheres, cooperation in the energy and chemical industries, as well as in the field of transport and logistics. During each session, the current state and prospects for the development of multilateral cooperation were discussed, as well as specific proposals for further interaction of the countries of the region were put forward and considered.

The Republic of Uzbekistan was represented at the Forum by Deputy Prime Minister – Minister of Investments and Foreign Trade Sardor Umurzakov. Speaking during the session “Trade, economic and investment potential of the Central Asian countries”, he noted the importance of the Forum as a platform for building effective mechanisms of intercountry cooperation aimed at sustainable development of the region.

Significant potential was noted for increasing intraregional trade – over the past few years, Uzbekistan’s trade with the countries of the Central Asian region has doubled and reached US$5 billion in 2020. In this context, the prospects for the development of e-commerce were emphasized, including through the creation of a unified electronic trading platform, where entrepreneurs and exporters of Central Asian countries can directly interact and reach mutually beneficial agreements. They also noted the need for further improvement of the regulatory framework in the field of foreign economic activity and the consistent elimination of trade barriers.

The priority area of cooperation was also designated the intensive development of industrial cooperation, which will make it possible to use the mutually complementary advantages of the economies of the region’s countries and form continuous intraregional value chains. It was noted that over the past 5 years in Uzbekistan, the number of enterprises with the participation of companies from neighboring countries has increased by 6, and specific examples of the successful implementation of industrial cooperation projects in the production of building materials, cars and household appliances, textile, leather and footwear industries are presented. as well as in agriculture.

Special attention was paid to increasing the transport connectivity of the countries of the region, as a key factor in sustainable economic development, attracting investment and stimulating regional trade. It was noted that the growth in freight traffic in Central Asia, which was observed in 2020 despite the restrictions caused by the pandemic, indicates significant opportunities for further expansion of international roads and railways and strengthening of transport and logistics infrastructure. In this regard, the Uzbek side voiced a proposal to intensify interaction on the development of transport corridors connecting the states of Central Asia, increasing the efficiency of using the transit potential of the countries of the region, as well as harmonizing and digitalizing customs clearance procedures for goods.

The session participants exchanged constructive ideas on further strengthening multilateral cooperation and promoting regional economic interests. At the end of the event, a common position was developed on the need to develop a multilateral dialogue aimed at identifying new “points of growth” for the economies of the region’s countries.

Within the framework of the Forum program, bilateral meetings and negotiations were also held. The agreements reached were enshrined in the relevant documents signed on the margins of the event.