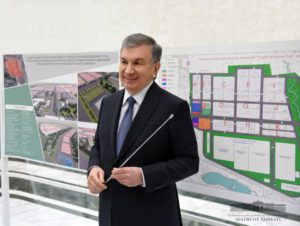 On January 24, the President of the Republic of Uzbekistan Shavkat Mirziyoyev got acquainted with investment projects that are scheduled to be implemented in the city of Tashkent in 2019.

During the presentation, reports were heard on the mechanism for monitoring and taking control over the implementation of investment projects. Thus, a working group led by the Prosecutor’s Office of the city of Tashkent was established in each district of the capital. Measures, taken at all stages from the allocation of land for investors to putting the object into operation, are specified. This will ensure transparency, honesty, eliminate corruption in the process of registration and implementation of projects.

Shavkat Mirziyoyev noted the need for supporting projects, promptly resolving issues that may arise during their implementation, assisting the effective functioning of enterprises after they are put into operation.

In Tashkent is planned to create a modern industrial technopark in Sergeli district with an area of more than 100 hectares based on European standards. It will be convenient for investors because all buildings and structures will be turnkey ready and have all necessary infrastructure.

Currently, work has begun on designing the technopark, entrepreneurs have been allocated 85 percent of the area. Here it is planned to create more than 10 thousand jobs.

Responsible persons were instructed to speed up the launch of the technopark and promote the development of production of high value-added products.

Source: Press-Service of the President of  Uzbekistan