As well as heads of states and governments of such countries as Australia, Canada, France, Japan, Norway, the Netherlands, Poland, the Republic of Korea, Denmark, the Czech Republic, Malta, Thailand, the United Arab Emirates, heads of international organizations and transnational corporations.

The Head of the state emphasized that strengthening long-term strategic partnership with India is one of the priority areas of Uzbekistan’s foreign policy and forwarded a number of proposals and initiatives for development of bilateral cooperation. 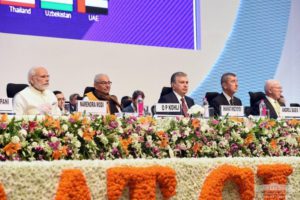 “Everyone is well aware that in the III-II centuries BC, the Indian land was connected with Central Asia by the Great Indian Way. Establishment of reliable trade and transport communications between the markets of Central and South Asia is relevant today more than ever. We are discussing the Trans-Afghan railway project. In the future, this corridor will provide access to South Asia, including to India through Chabahar Port”, said Shavkat Mirziyoyev.

It was emphasized that the most favorable conditions will be created to attract investors to Uzbekistan.

The Head of the state proposed to implement joint projects in information technologies, software, agriculture, renewable energy and training specialists for these areas. The first steps have already been taken in this direction, a joint technopark will be established in Tashkent.

“Based on huge economic potential of Gujarat and partnership with Andijan region, I propose to hold a business forum of the regions of Uzbekistan and India in the homeland of Babur and ancestors of the great Akbarshah in Andijan”, said Shavkat Mirziyoyev.

At the end of the speech, the President invited everyone to the exhibition of Uzbekistan organized within the framework of the summit, which introduces the industrial, investment and tourism potential, rich in history and culture of Uzbekistan.