> News of Uzbekistan > Issues of cooperation with the Russian Federation in the field of investment, finance and transport were discussed

Issues of cooperation with the Russian Federation in the field of investment, finance and transport were discussed 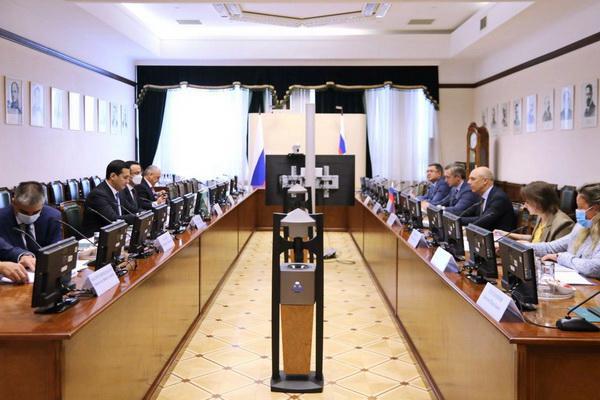 On 20 August 2020, within the framework of the visit of the government delegation of Uzbekistan to the Russian Federation in Moscow, a number of meetings of the Deputy Prime Minister of the Republic of Uzbekistan Sardor Umurzakov with the heads of ministries, departments and financial organizations were held, during which topical issues of current cooperation and plans for the near future were discussed.

Within the framework of the meeting with the Minister of Finance of the Russian Federation Anton Siluanov, the participants positively assessed the dynamics of development and the results achieved in the field of financial and technical cooperation. A constructive exchange of views was held on the measures being taken to ensure financial stability and support the key sectors of industry and economy of the two countries in the context of a pandemic.

The high potential for close cooperation in the financial and technical sphere was noted, bearing in mind the implementation of initiatives aimed at strengthening the potential of the cadastral service, tax authorities and the financial system, as well as digitalizing the financial sector of Uzbekistan by introducing Digital Budget technologies and improving the Single Treasury Account system.

Following the meeting, an agreement was reached on the development of a “Road Map”, which will include key areas of interaction to strengthen partnerships in the financial sector, as well as specific activities planned for implementation.

As part of the agenda of negotiations with the Chairman of the State Development Corporation VEB.RF of the Russian Federation Igor Shuvalov, issues of expanding investment cooperation by financing new joint projects of industrial cooperation in the construction sector, mining sector, agriculture, healthcare and pharmaceuticals were considered.

The state corporation “VEB.RF” is the largest development institution in Russia with assets of US$51 billion, financing large-scale projects aimed at developing infrastructure, industry, social sphere, strengthening technological potential and improving the quality of life.

During the conversation with the management of VEB.RF, readiness was expressed for further cooperation to accelerate the approval of a number of projects under development in the field of agriculture, to study opportunities for the implementation of public-private partnership projects in the field of transport and logistics, as well as to develop additional financing mechanisms for promising investment projects in Uzbekistan.

During negotiations with Oleg Belozerov, Director General – Chairman of the Board of Russian Railways, the sides discussed topical issues of further development of cooperation in the field of international cargo transportation, as well as joint projects in the field of railway transport.

It was emphasized that a developed railway system is one of the main components of trade and economic relations between countries and plays a key role in ensuring economic activity in the current epidemiological situation.

During the conversation, mutual interest in exchanging experience in the field of reforming the railway transport system, optimizing tariffs and increasing transit potential was emphasized.