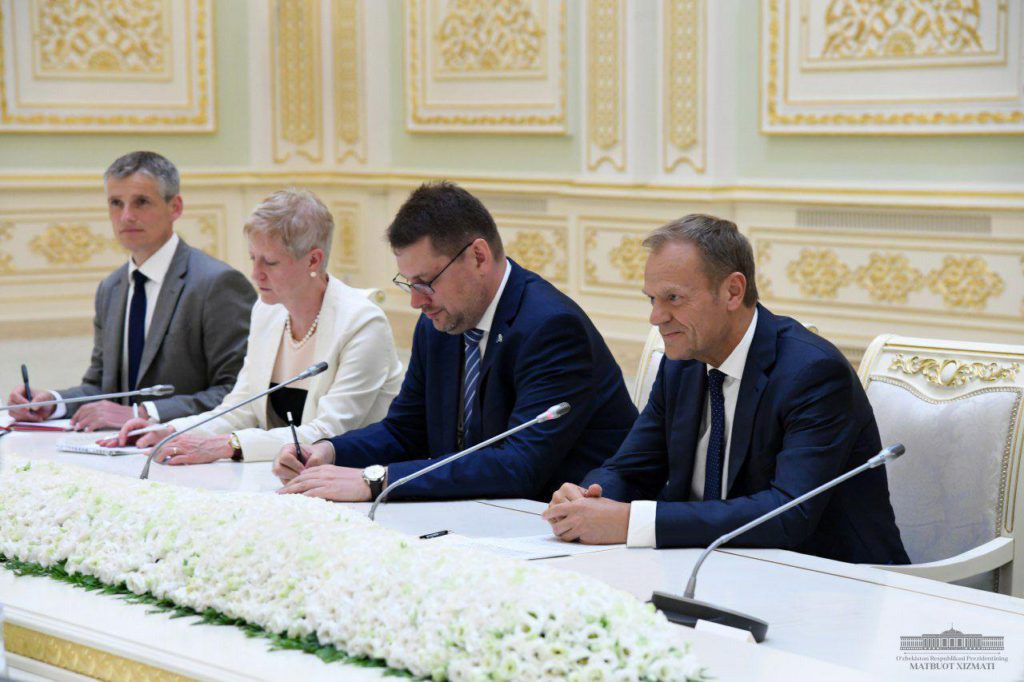 President of Uzbekistan Shavkat Mirziyoyev on May 31 met with President of the European Council Donald Tusk, who arrived in our country for the first time on a working visit.

The head of our state, warmly welcoming the distinguished guest, noted with deep satisfaction the development of constructive political dialogue and productive practical cooperation with the European Union in the trade and economic, innovation, scientific, technical and cultural-humanitarian fields.

Regular meetings of the Council and the Uzbekistan-EU Cooperation Committee, the development of inter-parliamentary exchanges, repeated visits to our country by EU High Representative for Foreign Affairs and Security Policy Federica Mogherini and other high representatives of the European Union speak about the intensification of contacts in recent years.

Negotiations have begun on the draft new Agreement on expanded partnership and cooperation between our country and the EU.
Volumes of commodity circulation and a portfolio of investment projects with the European Union countries grow. Consultations are being held on creating favorable conditions for further increasing mutual trade operations and investments.

In addition, European partners assist in the issues of Uzbekistan’s accession to the World Trade Organization.

The partnership with the European Bank for Reconstruction and Development has been resumed and expanded, the implementation of the first joint projects with the participation of the European Investment Bank in priority sectors of our economy has been launched.

Active scientific and educational exchanges are carried out within the framework of the Horizon 2020 and Erasmus Plus programs.

The meeting focused on issues of further expanding practical cooperation in the areas of economics, trade, innovation and investment, transport, science, education and health.

The President of the European Council highly appreciated the practical efforts of Uzbekistan to overcome the negative consequences of the environmental disaster in the Aral Sea basin. He confirmed his readiness for active cooperation within the framework of the Multi-Partner Trust Fund for the Aral Sea region.

During the conversation, the sides also exchanged views on other topical issues of the international and regional agenda, including the peaceful settlement of the situation in Afghanistan.