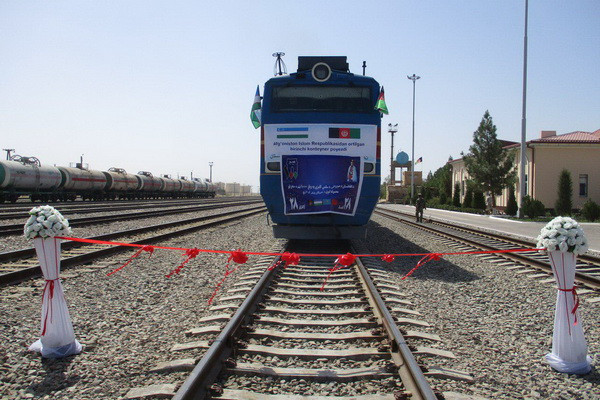 On September 5, the opening ceremony of the first export of container cargo from Afghanistan to China took place.

A train of 41 containers loaded with semi-finished stone of mineral talc was sent from the Hairaton station via the Friendship Bridge – a rail-road bridge across the Amu Darya river in transit through the Republic of Uzbekistan and Kazakhstan.

The opening ceremony was attended by representatives of the Islamic Republic of Afghanistan from the Presidential Administration Office, the Ministry of Transport, the Afghan Railway Administration, the office of the Governor of Balkh Province, the Mayor’s Office of the city of Khairaton, as well as the embassies of the Republic of Uzbekistan, Kazakhstan and China in the Islamic Republic of Afghanistan, JSC Uzbekistan Temir Yollari “

Recall that at a meeting of the intergovernmental commission on trade and economic cooperation in July, Uzbekistan and Afghanistan agreed to intensify mutual trade and transit of goods. According to the Ministry of Transport of Uzbekistan, in 2019, Uzbekistan Temir Yollari set a 20% discount on the transportation of grain and flour from Kazakhstan to Afghanistan, as well as canceled additional fees for commercial goods exported from a neighboring country. To intensify transit, the Afghan side intended to provide Tashkent with the nomenclature and volumes of cargo exports from Afghanistan to China and the EU countries.