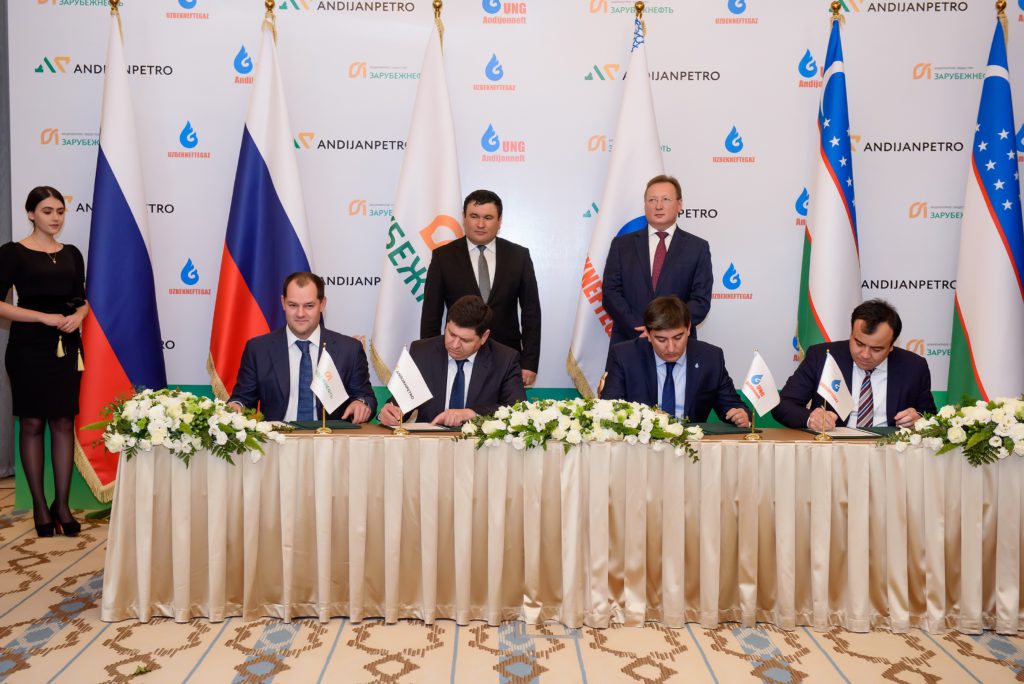 The actual transfer of operatorship from Andijanneft JSC to JV ANDIJANPETRO LLC took place on December 1, 2019.

New joint Uzbek-Russian venture “ANDIJANPETRO” was established on March 16, 2019, by Uzbekneftegaz JSC and Zarubezhneft JSC (Russia). The tasks set before JV ANDIJANPETRO LLC for activities in Uzbekistan include production and the active oil fields – South Alamyshik, Khartum and East Khartum.

During the official ceremony there was a live broadcast from the office of JV ANDIJANPETRO LLC in Andijan the specialists of which participated in the formal event by video conference call.

The participants in Tashkent and Andijan were greeted by the General Director of Zarubezhneft JSC S. Kudryashov and the Deputy Minister of Energy of the Republic of Uzbekistan J. Mirzamakhmudov.

After than the signing of documents took place, the top managers N. Syromyatnikov from JV ANDIJANPETRO LLC, J. Bekmurodov from Andijanneft JSC, B. Sidikov from Uzbekneftegaz JSC, O. Akimov from Zarubezhneft JSC participated in it.

The development of South Alamyshik field has rich history and is being conducted since 1944. The main approach of the new operator JV ANDIJANPETRO LLC – application of the modern oilfield equipment and technologies as well as innovational methods of enhanced oil recovery.

South Alamyshik, Khartum and East Khartum fields belong to the category of mature fields, it is planned to increase their oil production by several times in the framework of their development project by means of renewing subsurface and surface equipment, collection and systemizing of geological and geophysical data, production intensification, development system optimization as well as introduction of the company’s best practices. This project shall allow studying the peculiarities and geological potential of the region, establishing constructive relations with the partner and considering the possibility of expanding the area of activities by means of implementing other projects in Uzbekistan.

The new joint venture has set itself a task – increasing the current oil production level at the fields entrusted to it by more than 3 times. Apart from this, the professional level of the engaged specialists is being improved.