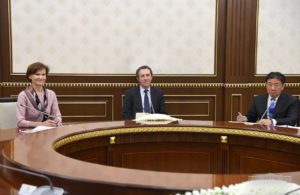 On February 26–27, Cyril Muller, Vice-President of the World Bank (WB) for the Europe and Central Asia region, visited Uzbekistan. During his visit, he met with the President of the Republic of Uzbekistan, the government, journalists and gave a lecture at Westminster International University in Tashkent.

Cyril Muller, in his speech, said that since the beginning of reforms in Uzbekistan in 2017, the scale and nature of WB cooperation with the country has increased. To date, the bank’s program in the republic is among the top three of its largest operations in the Europe and Central Asia region. As of February 2019, the WB investment portfolio includes 19 projects totaling about $ 3.4 billion.

He noted that when diagnosing the private sector of Uzbekistan, which was conducted by the International Finance Corporation, fruit-growing is one of the four drivers of economic growth along with civil aviation, the chemical industry and the ICT sector. Projects financed by the bank for a total of about $ 1 billion contribute to the development of agribusiness sectors (horticulture, livestock farming) and improving the efficiency of water management in agriculture.

Cyril Muller also noted that the WB is working with the government on issues of reforming the energy sector, including the development of a strategy, tariff policy, attraction of investments for the modernization of energy generating enterprises.