According to official data, Muslims – 93% (mainly Sunni of the Hanafi madhhab, the number of Shiites does not exceed 1%, they are concentrated in the Bukhara and Samarkand regions), Orthodox Christians – 4% (the proportion of Orthodox is steadily decreasing due to the emigration of Russians, Ukrainians, Belarusians and others), the remaining 3% are Roman Catholics, Korean Christians, Baptists, Lutherans, Seventh-day Adventists, Evangelical Christians and Pentecostals, Jehovah’s Witnesses, Buddhists, Baha’is, Hare Krishnas and atheists. During the Soviet period, religious organizations were, as in the whole Union, persecuted – many religious buildings were destroyed (for example, in 1980 there were only 89 mosques in the republic). Since the late 1980s, the government has become better to treat denominations, while maintaining the secular nature of the state. The change in state policy was expressed in the transfer of confiscated property to religious organizations (not only Muslim ones), and sometimes in construction at the expense of religious buildings. For example, in the late 1980s – early 1990s, the Panjob Mosque in Samarkand was restored and transferred to believers of the local Iranian community by state money, Torah scrolls were transferred to the Bukhara Jews from the museum, the German cultural center received the Tashkent Evangelical Church, the Roman Catholic parish was returned Polish church, etc. 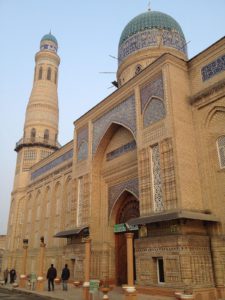 According to official data from 1 June 2010, 2,225 religious organizations of 16 different religious denominations were officially registered in Uzbekistan:

It is noted that attendance of mosques is high, especially among young people, who make up the majority of worshipers.

From Christian denominations on the territory of Uzbekistan officially operate: 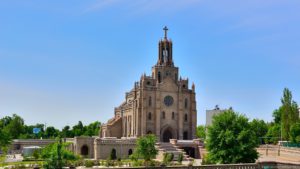 According to estimates, there are up to 10,000 Bukharan Jews and Ashkenazi Jews in Uzbekistan. Jews are concentrated in the cities of Tashkent, Bukhara and Samarkand. Over the past 20 years, over 80 thousand Jews emigrated to Israel and the United States, which was primarily due to economic motives.